VATICAN CITY—Telling the youth organization that if they come for the king they best not miss, the Catholic Church announced Thursday that it was not about to be out-molested by the goddamn Boy Scouts.

“If some pissant organization like the Scouts thinks they can beat us at the molestation game, then they have another fucking thing coming,” said Pope Francis, directing his message to the Scouts’ leaders as he stressed that a couple thousand piddling cases was a drop in the bucket compared to the generations of sexual abuse that had made the Catholic Church number-one in molestation for centuries on end.

“We’re talking hundreds of thousands of parishioners, children, and nuns abused by the people they trust most. Plus, we’re not doing it while hiding out in the woods like a bunch of cowards. We’re just at the back of the church, putting up huge numbers on the board day after day. So don’t come at us with this weak-ass shit, Boy Scouts.

We’re the OG diddlers around here.” At press time, the Catholic Church had offered to send a few dozen priests to the Boy Scouts of America to show them how it’s done.


Our thanks to theonion.com for this article.

by Engelbert Humperdink in Humor, Uncategorized

How do fish breathe underwater? Bill O’Reilly will never know because that information is hidden books.

by Engelbert Humperdink in Humor, The Vatican

VATICAN CITY—In a gesture of goodwill intended to show the Papacy’s support for victims, Pope Francis announced Thursday that children who have been sexually abused by Catholic clergy would receive 10 percent off at the Vatican City gift shop.

“While we will never be able to completely undo the damage that was done, it is my hope that those who were sexually abused can ease some of their pain by enjoying a discount on hats, T-shirts, and other merch at our lovely gift shop,” said the Pontiff, who explained that the reduced prices would be offered to anyone who could provide proof of molestation and came forward prior to his rise to the Papacy in 2013.

“These were heinous crimes, and Christ calls on us to be generous towards those who have suffered. So please, browse the wide selection of devotional statuettes and decorative crucifixes available in our store, or go online and enter the code ‘MOLESTED’ to get the discount as well as free shipping on any orders over $100.” Pope Francis added that any clergy abuse victims who visited the Vatican in person could also enjoy a complimentary framed photo of either him or Pope Benedict.

Our thanks to theonion.com for this article.

Jesus Announces Plans To Return Once The Dow Clears 27,000

by Engelbert Humperdink in Humor

THE HEAVENS—Urging Christians nationwide to “Buy! Buy! Buy!” on Thursday, Jesus Christ, the King of Kings and Lord of Lords, announced that He will come again to judge the living and the dead once the Dow clears 27,000. “Listen, my children, and I will tell you—when the NYSE closing bell rings out and the Dow Jones Industrial Average soars above 27,000 points, I will return to strike down the wicked and reign over the righteous forevermore,” said Our Lord and Savior, adding that only increased consumer confidence and low interest rates could hasten His glorious Second Coming. “Rejoice, stockholders, for the kingdom of God is at hand, assuming this upward trend continues. Repent and believe in the gospel of the bull market.” At press time, the Prince of Peace and Everlasting Counselor was scrambling to sell after the Dow had plunged 500 points.

Thanks to theonion.com for this article.

by Engelbert Humperdink in Catholicism, Child Abuse, Humor, The Vatican

VATICAN CITY—Claiming the vestments represent a vital step in ameliorating the church’s centuries-long history of addressing sexual abuse with subsequent cover-ups, the Catholic Church introduced a line of wrought iron molestation-proof altar boy uniforms Monday. “With these new impenetrable steel robes, Catholic altar boys can now serve the Lord and assist with Mass without the shame or fear of tempting otherwise pious clergymen,” a joint statement by senior Vatican officials read in part, explaining that the full-coverage metal loin-girdings are available to fit all sizes and ranges of youth’s suppleness and are guaranteed to spurn the fingers of any priest who attempts to violate its boundaries.

“The ceremonial six-inch-thick wrought iron vestments also boast a built-in alarm system; if the wearer is touched anywhere below the navel, a loud recording warns the offender to stay back in both the local dialect and High Latin. It is greatly hoped that with the implementation of these suits, we can finally spread the word of God in peace without the constant inconvenience and expense of shuffling priests from parish to parish after they’ve succumbed to the not-inconsiderable temptations of the younger members of our church.”

Vatican officials clarified that neither they nor the manufacturer were responsible for any priests who somehow figure out a way to get inside the suit with an altar boy.

Thanks to theonion.com for this story.

Vatican On Sex Abuse Report: ‘Listen, No Normal Person Is Going To Sign Up To Be A Priest’

VATICAN CITY—Following a Pennsylvania grand jury’s report on widespread sexual abuse of children by priests and a cover-up that spanned decades, the Vatican released a statement Friday saying “listen, no normal person is going to sign up to be a priest.” “Look, we ask an awful lot of ordained priests and make them follow all these bizarre rules, so it shouldn’t be surprising that we have trouble finding people who aren’t degenerate creeps,” said Pope Francis, adding that although the Vatican would encourage members of the clergy to stop engaging in child abuse, there ultimately wasn’t that much they could do since the Church’s mandate of celibacy and its tacit acceptance of child abusers “basically turns away all well-adjusted, reasonablepeople at the door.

” “It’s only gotten worse over the years because regular people would much rather have actual experiences in the real world than be cooped up in a rectory insisting that they’re married to God or whatever. We’d bet that if we relaxed the rules, reformed the power dynamics, and allowed priests to marry and have sex, we wouldn’t be overrun by monsters who can’t function in normal society, but we’re not going to do that, so it’s just going to be a bunch of freaks and deviants from here on out. Honestly, the way the Church currently operates is pretty much designed to appeal only to sick fucks who know they’ll get away with moral atrocities, if you think about it.” Vatican officials also defended priests who have been accused of child abuse over the past several decades, saying that at this point, given all of the available information, only an incredibly negligent parent would allow a child to be associated with the Catholic Church in any way.

Thanks to theonion for this realistic assessment of the state of the priesthood.

by Engelbert Humperdink in Christianity in General, Humor, The Bible

CAMBRIDGE, MA—Shedding further light on a long history of attempts to protect itself from accusations of criminal activity, biblical scholars at Harvard Divinity School reported Wednesday they have found evidence that the early Catholic church covered up for three wise men who molested baby Jesus. “After deciphering fragments of a previously unknown gospel, we now have textual documentation that clearly delineates abuse by three magi who arrived in Bethlehem and inappropriately touched the newborn Christ Child as He lay in the manger,” said Professor Raymond White, recounting the extensive efforts made by the church to scrub the story from early versions of the Bible and to discredit Jesus’ account of the event in His later sermons. “As described in newly discovered scraps of papyrus dating back nearly 2,000 years, these three magi were powerful men of great influence. Whatever moments of weakness or temptation they may have exhibited on that first Christmas morning, the early church must have seen fit to protect their reputations against any accusation from the Holy Family of Jesus, Mary, and Joseph, who were, after all, very poor.” White went on to note that additional passages from the text explain how the three wise men were quietly relocated and allowed to continue their work in a remote village in Persia.

by Engelbert Humperdink in Humor, The Vatican 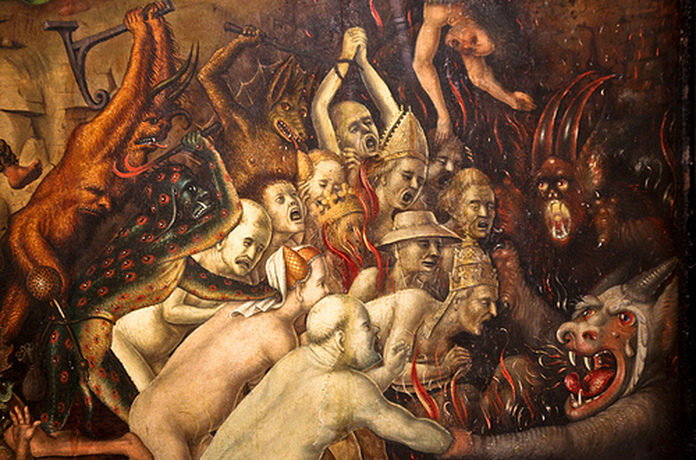 VATICAN CITY—In a historic admission of the Catholic church’s complicated and often shameful history, Pope Francis admitted in an informal public statement Thursday that “like, 97 percent” of Catholic leadership are “probably burning in hell right now.” “Believe me, contemporary Catholics are quite familiar with our legacy of murder, rape, cultural exploitation, and thievery on every scale from splitting up South America for silver rights down to just stealing stuff—make no mistake, most of those holy men were simply terrible people who deserve to fry in their own considerable fat for eternity,” said His Holiness, who took time during an informal lunch meeting with interfaith leaders to deliver a capsule history of manifold crimes committed by Vatican higher-ups, complete with a running commentary on the church’s long tradition of manipulating and mistreating its devotees. “Keep in mind this was just the stuff they did to other Catholics—at least, they were Catholic when those vicious scoundrels were done with them. Well, they’re paying for it in searing pain and screams now. Oh, and if someone wouldn’t convert, or couldn’t be converted by force? That’s when we get into Crusades, the Inquisitions, Spanish and others, the name of Christ invoked in the slaughter of native peoples, which is why their eyes will forever boil from out of their roasting skulls. I mean, it was Hitler who forced Jews to wear the yellow star, but centuries before that, Popes enforced dress codes for non-Christians. There’s no way those bastards aren’t being flayed alive by demons in hell right now.” Pope Francis, observing a recent tradition, declined to comment on the church’s multiple ongoing child-abuse scandals.

Thanks fo theonion.com for this piece

by Engelbert Humperdink in Humor, Islam

AMSTERDAM (Reuters) – The Freedom Party of Dutch anti-Islam politician Geert Wilders will hold a competition of cartoons depicting the Prophet Mohammad, it said on Tuesday.

The party said the plan to hold the competition in the party’s secure offices in Dutch Parliament had been approved by the Dutch Counter-terrorism Agency NCTV.

Cartoons depicting Mohammad have provoked violent responses in the past.

Here is our submission featuring Mohammed and his 9 year old wife, Aisha.

In 2015, Islamist gunmen killed 12 people at the Paris offices of the French secularist satirical newspaper Charlie Hebdo, which had printed cartoons of the Prophet. In 2005, the publication in a Danish newspaper of a dozen cartoons depicting the Prophet led to violent protests across the Muslim world.

Wilders’ Freedom Party is the leading opposition party in parliament after coming in second place in elections last March. He has called for the Koran to be banned, and says Islam is a totalitarian faith.

American cartoonist Bosch Fawstin, winner of a similar contest in Garland, Texas, in May 2015, has been asked to judge the Dutch contest, which will be held later this year.

Freudian Slip? When Is A Church A Toilet?

by Engelbert Humperdink in Humor

Fiji’s tourism board has been forced to apologise for an embarrassing error on an advertisement.

In a cringeworthy gaffe, officials had to remove the ad after a mistake in translation saw them call a ‘church’ a ‘toilet’.

The ad featured a Fijian dressed in a vibrant blue shirt, shell necklaces and red flower tucked behind his ear with a large smile on his face.

The video was used to portray the local iTaukei language to their visitors, giving them helpful tips to use while in Fiji.

After the pear-shaped translation mistake was noticed, Tourism Fiji issued an apology and claimed it was cause by a design error.